Tucker’s been excited ever since he saw the Christmas stockings.

He’s learned over the past 4 years to associate them with special treats. Now Brando’s been educated too, and now he too thinks Christmas is wonderful . We broke with our tradition and gave the dogs not only pig’s ears and edible treats, but also 3 toys. BAAAD idea. Tucker managed to destroy 2 of the 3. We plan to take at least one of the them back to Petco and complain, being as how it was advertised as standing up to “power chewing.” (Yeah. For about 10 minutes!)

It was all very exhausting… for dogs.

Brando went in for the Big Snip Monday morning and returned the end of the afternoon, wearing the cone and looking very, very sad. We felt bad for him, but we were only following orders — the orders of CCI that he be neutered when he reached the age of six months. That’s apparently standard for all the crossed breeds. Brando’s father, Desi II, was a pure-bred Golden Retriever, but his mother, Avani, was half black lab and half Golden. (She reportedly looked like a black lab.)

Since that first night, things have picked up. Brando doesn’t seem very intent on licking his incision (which held together at least in part by some sort of glue).

So he doesn’t have to wear the cone when we can keep an eye on him — while out walking, for example, or hanging out with us in the kitchen during dinner preparations. Steve took him Christmas shopping, coneless, yesterday, and came back with reports of countless ladies swooning over Brando’s cuteness and exceedingly soft fur. He feels like mink.

Last Monday, Brando and his classmates in Puppy Kindergarten were tested by our teacher, Mike Fowler, and Steve and I were pleased (if surprised) that Brando got almost all 9s and 10s in all the areas in which the dogs were tested. We’ve now begun taking him out on our grocery-shopping expeditions. Although he typically pees at least one lake per hour, he hasn’t yet had any accidents in a store (nor will he ever, we fervently hope). Still the distractions of morcels on the ground and other friendly shoppers are an intense test for him. He particularly seems to adore young ladies. He’s seen here with Mike’s friend, Maria (in our kitchen, not the grocery store.)

Jar-Jar Binks. See the resemblance? (Well, we can. It’s that long nose and friendly look.)

I’m turning over a new leaf, vowing up update Brando’s blog more often. A few highlights from recent weeks:
While Steve and I exchanged homes with a Reno couple (so that we could spend Thanksgiving with Michael and Elliot, who flew in from Chicago), Brando went to doggy paradise, aka Retrieverland, aka the home of former CCI puppy-raisers Teri McCartney and Tom Geary. Here he is romping with one of their millions of toys. Brando has made it clear he would like more puppy toys from Santa for this Christmas. 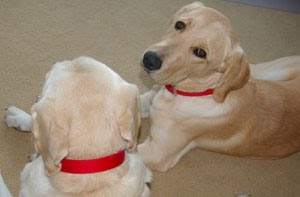 Brando was too young to participate in last week’s La Jolla Christmas Parade. Pups had to be 7 months old, and he’s only 6 months old. But he and Tucker have switched to their festive red holiday collars.