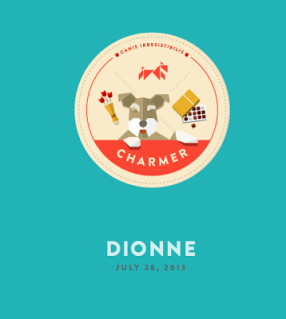 It’s always satisfying to get feedback about science experiments in which one participates. We’ve just gotten some from the folks at Dognition. That’s the company/website set up by the Duke University  anthropologist who specializes in canine behavior research. I’d read about him and his work in the New York times about a year ago and was very excited when we learned last July that CCI had formed a partnership with Dognition, so CCI puppy-raisers would be able to participate for free, instead of paying the normal $99 fee.

We signed up, and last July Steve and I administered all the science-based games to Dionne to assess her empathy, communication skills, cunning, memory, and reasoning.We quickly got her assessment: of the 9 profiles types, she fell into the category of Charmer, the Dognition site informed us — gifted with “exceptional social skills.” She literally scored off the chart for memory, and her performance in the “Empathy” section also was extraordinary. “If most dogs are bonded to their owners, Dionne absolutely adores you,” the report informed us.

Now CCI has sent out some of Dognition’s broader initial findings about CCI pups who’ve been tested (almost 300 of them so far). Apparently, they’ve identified significantly more “Socialites” and “Protodogs” among the ranks of the CCI participants. “This is no surprise,” the report said, “because Socialites and Protodogs from a young age tend to be more bonded and use more collaborative strategies when solving problems…we are also starting to see differences within the 5 cognitive dimensions. Specifically in the Memory dimension, Canine Companions’ dogs are significantly more…reliant on their memory than most other dogs. It seems that dogs from Canine Companions naturally have an amazing memory, giving them the ability to remember many different commands and situations to help their owner.”

I’m a little confused by what it means that Dionne was a Charmer, rather than a Socialite or Protodog. Will it make her do better or worse in her Advanced Training? But we’re generally in the dark about Dionne at the moment, since she’s still in the kennels because of being in heat.

I did hear from the puppy program manager that the vet tech will begin testing Dionne to see if she can come home for a brief spell before the ceremony this Friday.

Watch this space for news!