We didn’t spend much time in casinos on our recent visit to Reno, but one night we did meet some friends at one for dinner, during which Kyndall practiced her “Under” command well enough that her presence was almost imperceptible. On Saturday night, thanks to the generosity of a friend who’s a regular patron of the Atlantis casino, Steve and I got to stay in a 23rd-story room in the Concierge Tower (instead of driving back to Squaw Valley after a late bachata concert). Tucker again hung out at Stephanie’s house, but we took Kyndall, officially caped, up to our room and kenneled her for most of her time there. If there was madness playing out at the slot machines, Kyndall again was calm and collected.

She was agog in the glass elevators, every time we ascended or descended (which we had to do several times for her bathroom breaks).

She also seemed a bit creeped out by the floor-to-ceiling glass windows. Otherwise, her behavior was impeccable.

Still, if she could talk, I think she would attest that her favorite moments were spent out on the trail, or on the deck of our cabin, smelling the delicious aromas of the pine forest.

Or maybe getting released from the torment of the car kennel upon  our arrival back home. The next day, a charming four-and-a-half-month-old girl named Spirit arrived for six days of puppy-sitting by us and lively play with Kyndall. In the world of puppies, that’s real fun. 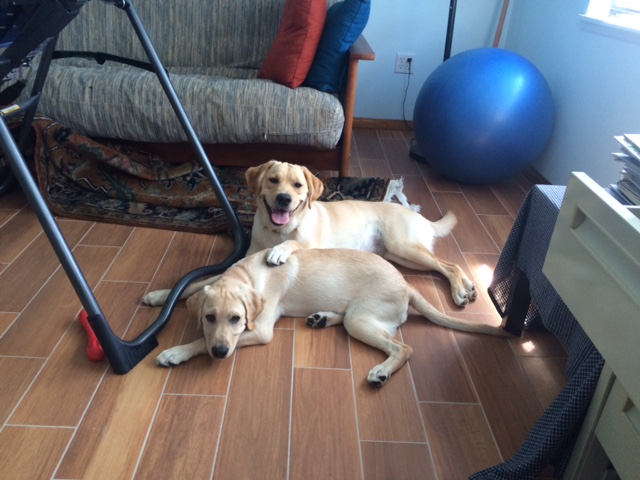 Our recent adventure with Kyndall in northern California wasn’t all hookers and road hell. She also got a bigger dose of Nature than she’s had in a while. One morning Steve and I took her on a four-hour hike up to Shirley Lake and the “High Camp” above the floor of Squaw Valley. We left Tucker in his kennel in the cabin; the 2000-foot elevation gain would have killed him. (Or us, given that after he collapsed, we would have had to strap him to our backs and haul him down the mountain.) But Kyndall handled it brilliantly, never flagging and leaping effortlessly up the steep rocky passages.

At first we kept her on the leash; we were unsure how well she would stay with us. But after a while, we freed her. At one point, she found a pine cone and raced around with it in a manic frenzy. But mostly, she stayed close and managed to avoid any snakes.

She seemed entranced by the lake (as were we). Unlike her, we restrained ourselves from jumping in the water. (And she stayed in only for a minute. It was cold!)

When we reached the High Camp, I immediately took the tram down to the valley floor — 2,000 feet almost straight down. But Steve and Kyndall explored the
facilities, where many of the 1960 Winter Olympic events took place, before taking the next tram down themselves. 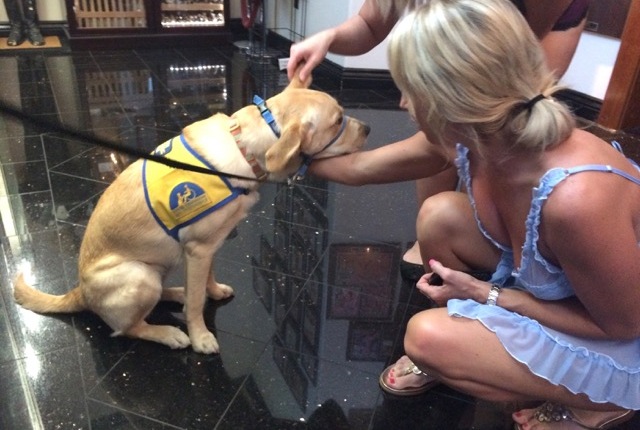 On Sunday, August 16, the day Kyndall turned 10 months old, we hit the road to travel to Squaw Valley in Northern California, where an old friend had offered us the use of her cabin in the woods. We took Tucker, too, and the 12-hour journey must have been a trial for the dogs. They shared a wire kennel in the back of our van, and though commodious, it was more confinement than they’re used to for that length of time.

We stopped several times along the way, to give our furry passengers a break…

The cabin was beautiful, but we spent much of our time in Reno, visiting our son Michael and his girlfriend Stephanie. The first day after we arrived, Tucker stayed in Stephanie’s backyard, while Kyndall, Mike, Steve, and I toured Virginia City, which flaunts its Wild Western heritage.

Then we drove to Carson City, the state capitol. It was on that journey that we spotted signs for the brothels — which are legal in this part of Nevada. Curious, we pulled off the road to gawk at the famous Bunny Ranch (made famous by the HBO series, “Cathouse,” which I had somehow managed to miss. When Michael insisted he had a friend who had gone in just for a drink and a tour, we decided to see if this was indeed possible.

So it was that the four of us strolled in the front door (Kyndall in her cape, of course). Within seconds a parade of scantily clad young women emerged and lined up before us. One, acting as a sort of impresario, asked if we’d like to take a tour.

“Oh, we can do that?” I squeaked, embarrassed.

Another mortifying pause. Then Michael brusquely pointed to a thin, pale blonde in a bikini. She beckoned him to follow, but when Kyndall, Steve, and I made to tag along, the madam intervened, declaring that the tours could only be given one on one. Er, no thanks, Steve and I declined. While Michael disappeared into the brothel interior, his mom and dad and Kyndall waited in the entrance. Naturally, some of the remaining young ladies asked if they could pet Kyndall. 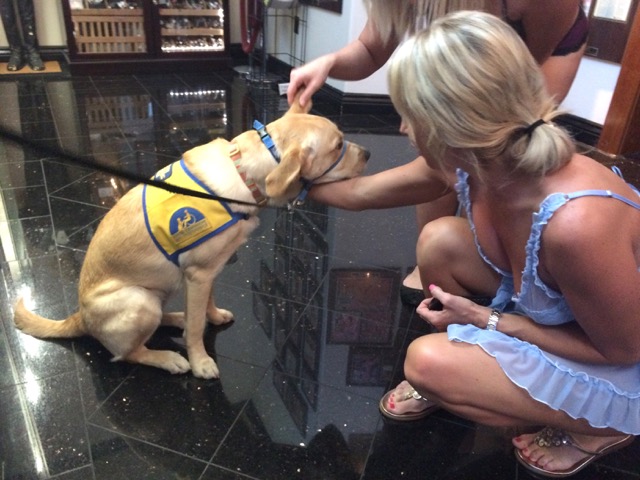 A love fest of a different sort unfolded. “This made my week!” one of the girls  exclaimed. Kyndall looked pretty content too. But Mike appeared within a minute (and later reported that although the sexual services were clearly offered, he had declined). Then we were out the door, on to more adventures

Ten months!!! (It’s Tucker who’s ten years old.  He turns eleven on November 30.)  But for Kyndall, ten months feels like a milestone.  During that time she transformed from this: 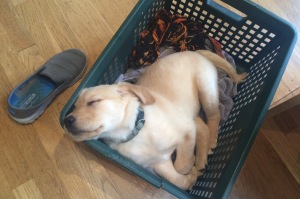 She’s a generally calm and well-behaved young lady, who will chill out beautifully beneath restaurant tables (even if she does a bit of occasional digging.)

We didn’t celebrate her birthday with biscuits and a beach run. Instead, we took her on the road. As I mentioned in my last post, my blog software went into a brief revolt, but I think I have reformed it. So stay tuned for How Kyndall Spent Her Summer Vacation, parts 1 and 2 (including swimming in a High Sierran Lake!  And visiting a bordello.)

I’ve been having blog software problems and haven’t been able to post properly, but hopefully, I’ve got them straightened out. I guess we’ll all find out soon!

Yesterday was one of those rare days, when we let our guard down and allowed Kyndall to hang out in the back yard, only loosely supervised. It was Sunday, and Steve was puttering in the garden, so he would glance at her from time to time. The figs on our tree are reaching full ripeness; at least a dozen or two fall to the ground every day, and Kyndall is wild about the taste of them, so she clearly ate plenty. But here’s the news:

While she may be pooping at least twice the normal quantity, she did NOT throw up. She didn’t do anything else bad, either. Part of the day, she didn’t even hang out outside, but relaxed with me up on my office. (Kyndall really knows how to chill.)

It was almost boring. Clearly we’ve reached the stage of puppy-raising with her where there’s less to report, at least from one day to the next. But Steve and I have come to think dogs who graduate have to be a little boring. Kyndall’s got a long way to go — more than 9 months till she begins Advanced Training. But we’re feeling optimistic.

It feels like Kyndall has suddenly gotten wonderful at something: sitting quietly under or near the table when taken out to a restaurant. On at least three occasions in the past few weeks, her behavior in such settings has been nearly flawless: no springing to her feet every few minutes and trying to wander off; no snorfling around in search of food scraps. It makes her easy to take along.

We can’t remember if any of her predecessors were ever this good in restaurants. We’re pretty sure none were at Kyndall’s age (not quite 10 months).