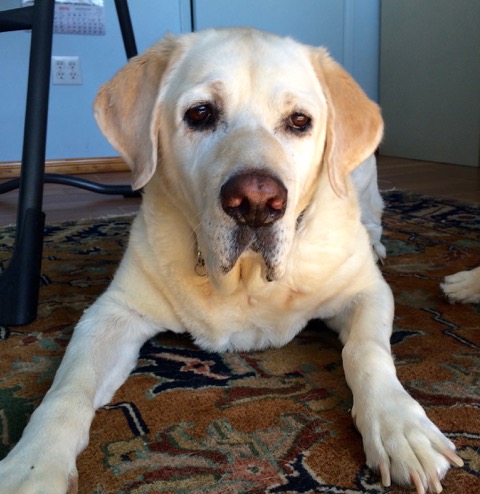 Does this look like the face of a depraved source of corruption? We’ve never thought so. Tucker, our first CCI puppy, is normally such a mellow and unobtrusive fellow. Though he was early judged by the professional trainers to be unsuitable for a life of service (because of his excessive distractibility), he’s never been a troublemaker, and that’s been particularly true as he nears his dotage. (He’ll turn 11 at the end of this month.) For a long time, we thought he was an actively good influence on our successive puppy trainees. But we’ve just seen one acquire an actively pernicious behavior that obviously was learned directly from Tuck.

About his only “bad” habit has been to raid Steve’s basket of recycled paper. For some years now, Tucker has done this almost every time we go out and leave him at home. He does very little to the paper — nibble on the edges a bit. We’ve joked that it was his way of expressing his displeasure at being left behind — a doggy snit.

Recently, however, Kyndall has begun doing the same thing when she’s bored. She’ll snatch a piece of paper out of the basket and rip it up. (Most fun of all is if we forget and chase her, trying to get it.) Obviously, she watched Tucker do it and decided it looked like fun.

We’ve also begun to question whether puppies really do better if there’s a “civilian” dog at home. I supposed CCI probably could produce some research and statistics on that question, but I’ve never seen any (and certainly they don’t disqualify anyone from puppy-raising if they have a home dog.) But Steve and I have begun to think the presence of another dog may distract our trainees and make them focus less intensively on us.

For that reason, assuming that we continue to raise puppies to be service dogs, we’ve resolved NOT to have another home dog, once Tucker shambles off to the big doghouse in the sky. Of course, despite his occasional depravity, we hope that’s a long time off.

4 thoughts on “Corrupter of innocents”