Over the last year or so, we’ve taken Kyndall to the movies numerous times. She’s never disgraced herself, as one or two of her predecessors have (relieving themselves in the lobby or sticking their noses into the affairs of other nearby movie-goers.) Kyndall has only gotten more and more well-behaved. Still, we had never taken her or any other CCI trainee into any kind of live theatrical situation (e.g. a play or lecture). Generally speaking, access into the seating in such venues is more constricted than it is in movie theaters, and the opportunities for distraction (both from the stage and to it) have seemed more terrifying to me. But Wednesday afternoon I was seduced (by Kyndall’s exemplary behavior) into taking her where no puppy (of ours) has gone before.

We’d been invited to a lecture at the renowned Scripps Research Institute. It was being given by a chemistry professor whom we know socially to be a warm and charming person. We understood little about her scientific work, however (other than that it has won admiration from other scientists around the world.) This was a special public event, intended to showcase the work of women at the institute. So we accepted the invitation gratefully — and decided to take Kyndall along. 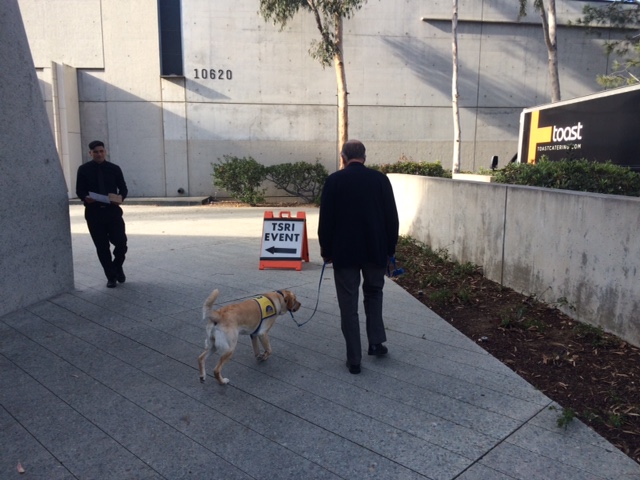 Before the talk started, Steve walked her on the grounds, where she not only peed, but also off-loaded a small mountain of puppy poop. That reassured me we didn’t need to sit near an exit we could bolt through if she began fidgeting enough to make me nervous. Instead we sat in the middle of some seats just a few rows up from the stage (within spitting distance of a Nobel laureate in the audience!) Although the turn-out was excellent, the auditorium was big enough that Steve and I could occupy both sides of an empty seat (in front of which we positioned Kyndall). I commanded her to go Down, she obeyed, and that was pretty much all there was to it. 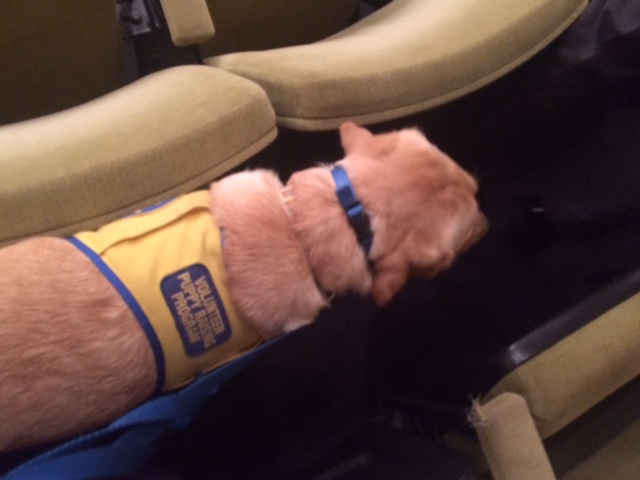 She did sit up and look startled on the few occasions when the audience burst into applause. (People don’t often do that in movie theaters.) And she lunged for some cracker crumbs on the floor of the post-talk reception. But she also responded quickly to correction.

Even more gratifying, she attracted a little stream of admirers at the reception. For the most part, these were brainiacs — major-league scientists who approached us deferentially in search of a puppy snuggle. Kyndall was happy to accommodate them.

3 thoughts on “Puppies can too attend chemistry lectures!”