Here’s yet another way in which Beverly is unique among all the dogs we’ve had: she alone has a couple of ridiculously long hairs growing above her eyes. I suppose they’re technically eyebrows, but they’re so much longer than other specimens in that class. They’re more like eyewhiskers. She only has a handful of the super-long ones per side, and they’re not easy to photograph. Nonetheless they give her a special look (half geezer and half intentionally disheveled Hollywood starlet?) 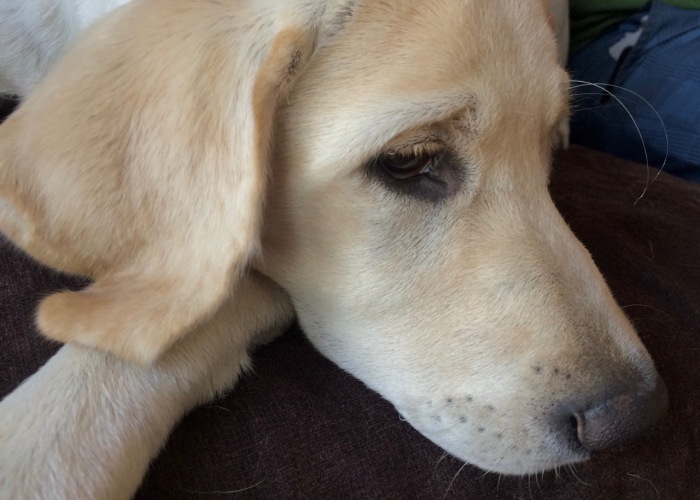 As if not to be outdone by her, Tucker these days appears to be impersonating a dalmatian. His head and ears are covered with black spots; they make him look disreputable. We know why: he goes out to the fig tree and rummages around, looking for tasty morsels, and the fig juice drips on him. Bathing him is definitely on the agenda for this weekend.

She’s certainly pretty. She’s sweet and extraordinarily calm. But how smart is Beverly?

In the course of raising the 11 dogs that Steve and I have lived with over the past 39 years, we’ve given a lot of thought to the question of canine intelligence. We’re aware that golden and labrador retrievers regularly rank high on lists (like this one) of the smartest breeds. But that’s only mildly satisfying. Among the many things we’ve learned from raising CCI puppies is how dramatically individual dogs bred systematically from just those two breeds vary in personality.

Then there’s the question of what qualifies as canine intelligence. Stanley Coren, author of The Intelligence of Dogs: A Guide to the Thoughts, Emotions, and Inner Lives of Our Canine Companions, distinguishes between adaptive, instinctive, and working intelligence. His “instinctive intelligence,” for example, refers to inherited traits such as the instinct to herd. By that standard, none of our dogs has been particularly bright; put each one in a field with a bunch of sheep and they’d all probably cause an ovine riot. A few were mad-keen ball-chasers, but none would have been able to track a criminal by scent. The puppy who seemed most mentally agile — inventive and relentlessly active — was Dionne. But she drove us to distraction with all the ways she thought of to get into trouble (and she ultimately was released from Advanced Training after her trainer judged her energy level and distractibility to be “high” and her learning rate to be only “moderate.”)

About Beverly, we’re withholding judgment. She does things that baffle me. She’ll whine around 6 a.m. — suggesting that she thinks it’s time to rise and shine. But when I stumble to her kennel and open the door, she most often will just sit inside it, rather than bounding out as most puppies would. I sit down next to it and wait. Sooner or later, she emerges.

Or she’ll come halfway down a flight of stairs (in response to a summons from one of us.) And then she’ll sit down on one of the treads. And sit. And sit — ignoring our pleas for her to descend all the way and come to us. What is she thinking? we wonder.

I recently read a post on the Rover.com blog, Daily Treat, that made me think of Beverly. Discussing the question, “Do you really want a smart dog?” the author commented that “dogs who are not engaged but lazy also can make great pets, as their motivation to do nothing appeals to many people. Low activity, low engagement equals not trainable, but easy to live with.”

I’m certainly not going to declare at this point that Beverly is not trainable. She’s performing respectably in puppy class. But she’s less active (lazier?) than any other puppy we’ve ever had.

That HAS made her seem easier to live with. I have mixed feelings about this. Smart is good, right?  But easy to live with also feels pretty awesome.

It’s the most challenging time of  year for Steve and me as puppy-raisers: the figs on our huge old tree have ripened, and this year’s crop (like all its predecessors in our memory) is so abundant we can’t eat or give it all away. It’s literally raining Mission figs out there.

This has been going on for 2 or 3 weeks, and to our amazement and relief, Beverly for a long time didn’t seem to notice what was happening. The fig tree occupies a big part of our lower back yard, which also serves as our dogs’ principal toileting area. Yet even though we take Beverly back there countless times daily, she strolled right by the large black sweet-smelling morsels without lunging upon them and gobbling them down, as so many other puppies have done.

There are two sound reasons to discourage puppies from eating figs. One is that when labrador types are left to free-feed on figs, they get visibly fatter. Tucker’s been doing this every summer for most of his life. We don’t mind because he’s our personal dog, and we know that the season is short; the extra pounds will soon melt away. But Beverly belongs to CCI, and its rules are strict: puppies are supposed to eat only puppy chow — and only enough to keep them lean and trim.

The other consideration is that figs — we know from sad experience — cause many puppies to have diarrhea. So we resolved to keep Beverly from ever learning about their deliciousness. Unfortunately, Steve’s and my teamwork fell apart Friday afternoon. He was out gathering figs for the tart I was making. I went out to collect them from him, and Beverly trotted outside after me, off leash. I re-entered the house, and Steve followed a few minutes later, not realizing that Beverly was still wandering around outside. Fifteen or 20 minutes passed before I wondered where she was. We called her and she appeared shortly — paws muddy, fur coated with figgy detritus.

Miraculously, whatever she ate out there did not roil her digestive system; no diarrhea ensued. But clearly, the jig is up.

She’s eaten from the tree of knowledge, and now we really have to be on guard — not only for this rest of this season but also for the one next summer. (Beverly should be with us all the way until November of 2017.)

Steve and I have been preoccupied recently with some (human) members of our pack, so my blogging about Beverly has suffered. But we haven’t been ignoring her. In line with our resolve to introduce her gradually to public outings, Steve took her on two simple errands this afternoon: a quick trip to the post office and a short outing to our local grocery store.

He returned with bracing news: her behavior both places was good. Outside the post office, he instructed her to “Hurry,” and “She peed an ocean.” Inside, when he got up to the counter, he ordered her to Down and Stay and she never once popped up while he registered his letter and paid for the stamps. “She likes staying down,” he noted. “It’s restful.”

Their next stop was the Gelson’s a few blocks from our house. Once again, before entering, he instructed her to hurry, and she dutifully squatted down, but only squeezed out a few drops. Inside, she was the model pup, walking nicely at his side, and again maintaining her Down position while he bought sandwich meat at the deli counter. Several other customers admired her beauty. Steve says she seemed to enjoy that.

Back in the parking lot, she posed for another photo:

… and then on the way to the van, she squatted and unloosed another ocean of pee on the asphalt.

At least she didn’t do that IN the store. With luck, she never will.

Beverly turned 4 months yesterday. She celebrated by playing with her pal Kora for most of the afternoon, while Kora’s puppy-raiser golfed. Thank god for photos, or else it would be easier to forget how MUCH puppies change in their early days. 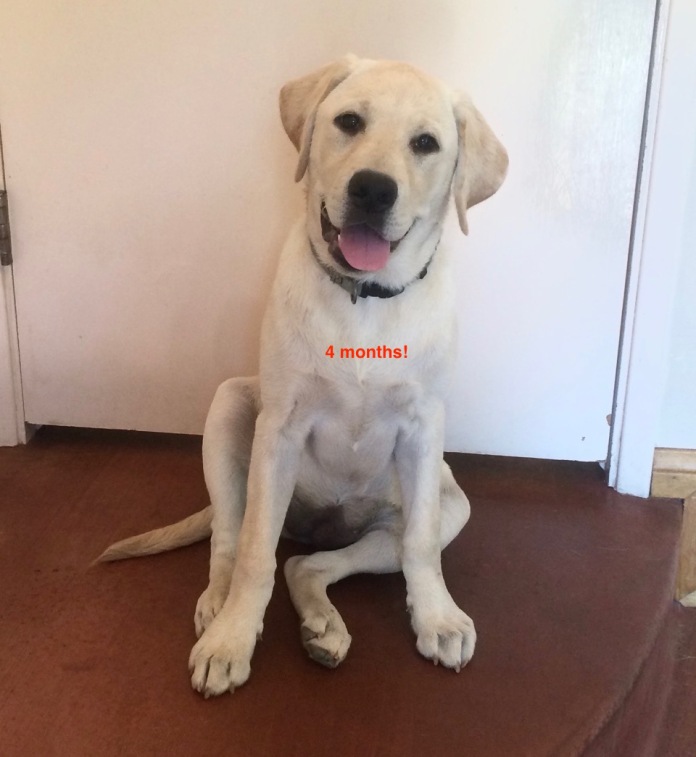 Last Friday, Steve took Beverly in for her final set of puppy shots. She weighed just over 30 pounds, and she didn’t make a peep when the needle went in. The biggest cause for rejoicing, however, is that now that’s she’s been fully immunized, it’s finally legal for us to take her out in public. 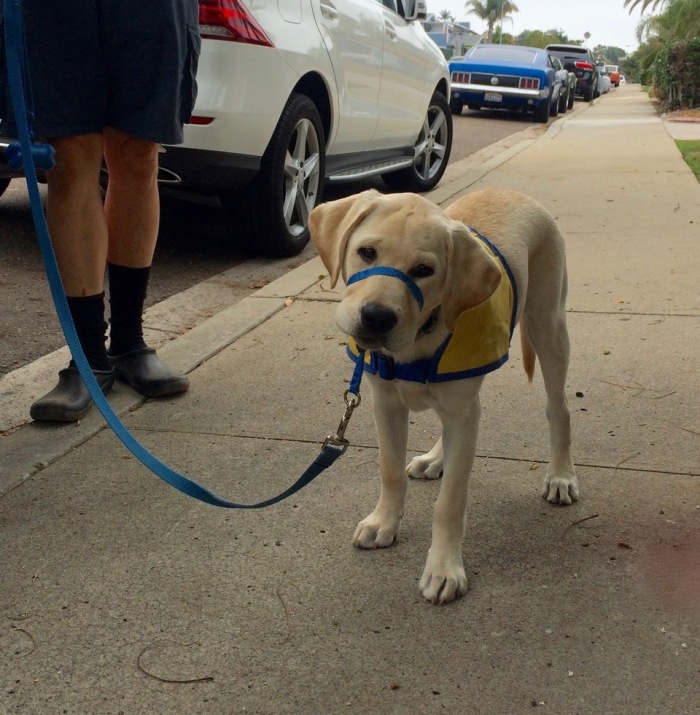 In the past few weeks, we’ve cheated a little, taking Beverly out for short walks in our neighborhood (where we assume that the incidence of unimmunized dogs is low.) But we’ve conscientiously refrained from having her accompany us into any stores or restaurants or movie theaters or the like.

That chapter of her service dog training has now begun, however. Saturday night my nephew Lee DeWyze (who won American Idol in its 9th season) was performing at a small music club in Normal Heights as part of a West Coast tour showcasing his latest album. We knew the club to be dog-friendly, so even though the quarters would be tight, we decided to take Beverly along (in part because Lee is a huge dog-lover.)

It couldn’t have gone better.  Outside, Beverly was the model of puppy calm and composure.

Once inside, she curled up on the beautiful quilted “landing pad” that was a gift from her human great-grandmother and went right to sleep. She barely moved for the next three hours. 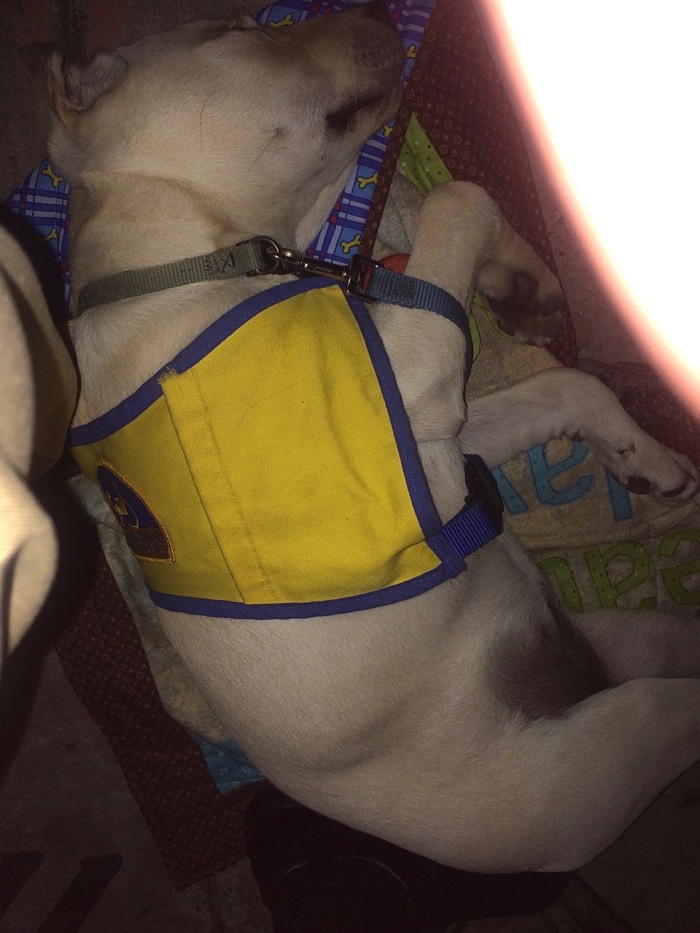 Steve and I have decided to take our time about introducing her to grocery-shopping. One or the other of us usually does a big shop every Saturday, and those outings can be exhausting (for humans and puppies).

So we plan to build up to it with her slowly. But we’re ready to go out to the movies as soon as there’s something that calls to us to be seen on the Big Screen. Whenever that is, we’re confident Beverly can handle it.

I’ve been forgetting to report what I learned recently about Beverly’s heritage. We were told in her initial forms that she’s a labrador-golden cross. But in recent years, we’ve gotten interested in the percentages of each of those breeds in our puppies. Kyndall, for example, was 50% of each. Only Tucker (our first CCI dog) and Yuli (our 2nd) have been purebreds (labrador retriever).

So I emailed the woman who is the breeder-caretaker of Beverly’s mother, Phyllis. Jan Thornburg is also currently raising Beverly’s sister, Bean.  Jan responded, “I think these little ones are 1/16th GR and 15/16ths Lab.”

Not that this matters. But it sort of explains why Beverly looks like she could be Tucker’s daughter, a resemblance that seems to get stronger with each day. They get along well, and, as true labs do, both love to eat.

I would say that Beverly has also been taking lessons from Tuck in the art of relaxing. But that’s not really true. She’s been a natural at that herself, right from the start.