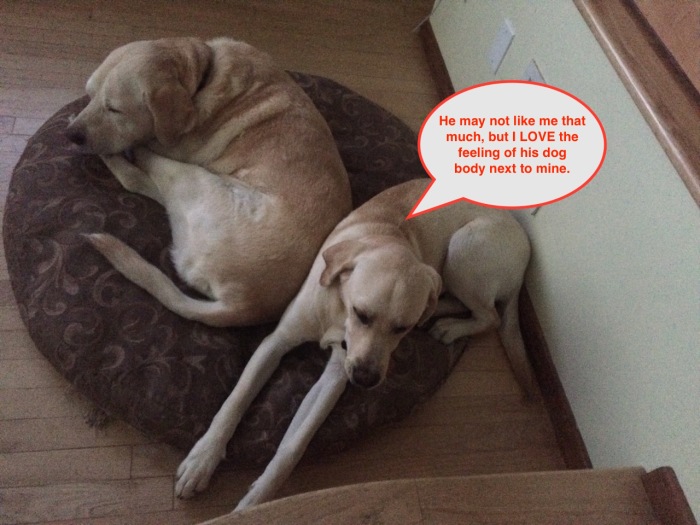 Steve and I love dogs, but we don’t sleep with them. I know some people do, and I don’t judge them. But I personally don’t want to share my bed with anyone who’s as unsanitary, hairy, and disrespectful of personal space as all my dogs have been. With CCI puppies, it’s especially a no-brainer. The handbook states clearly that the aspiring service dogs should never sleep on people beds.

In the first days and weeks, kennels also are an important tool for house-training. Dogs instinctively avoid soiling their dens, so sleeping in a crate is an important first step toward self-control.

Beverly seems reasonably content in the crate that’s up in our bedroom. But she clearly prefers snuggling up with Tucker pretty much every chance she gets. (He spends each night on a cushy dog bed a few feet away from her kennel.)  Sunday for the first time in ages the night was chilly. To me it felt like our Southern California winter at last was approaching. I suggested that maybe we should let Beverly spend the night next to her large, furry buddy.

“And what if she gets up and pees in the night?” Steve retorted.

“What if she chews his bed?”

“She won’t DO that!” I asserted. “She doesn’t do that in the day. Now it’s nighttime. She’s sleepy.”

So we tried it out, and it seemed to be a success. We heard not a peep in the night, and both dogs slept soundly until after I woke up, around 6:30.

We let her sleep with him the next two nights, and the results have been mixed. Tuesday morning, I awoke a little after 6 to the feeling of a puppy nose gently nuzzling my hand. (That nose would have been unable to do that, had it been crated.)

This morning, I set my alarm for 5:30 in order to attend a 6 a.m. class at my gym. This time I had to roust both dogs off the cushion.

We’ll keep trying it out for at least a few more days. Even now I’m not sure what Tucker thinks. Steve is sure he has to like it. “He’s an 84-[dog]-year old guy,” he points out. “Not many cute young girls want to sleep with him.”