Well, we’ve terminated our experiment in letting Beverly sleep with Tucker. Despite the promising start, Beverly started taking a more aggressive approach to waking me up when she felt ready for her breakfast, i.e. coming up and plopping her paws on the bed, next to my sleeping face.

I didn’t appreciate that, so we starting putting her leash on her and clipping it to the little hook on the wall next to Tucker’s dog bed. That confined Beverly. But one morning we woke up and found poor old Tuck sleeping mostly on the hard wood floor, while Beverly sprawled in the middle of his cozy pillow. He looked morose, and we felt bad for him. His old bones and joints need some soft support.

So Beverly is spending her nights in the kennel again, which she doesn’t seem to mind. Actually, at the moment, we’re hosting one of our former CCI puppies, Darby. (She was released from Advanced Training and became the beloved pet of some friends.) Darby and Beverly like each other and play pretty well during the day, but at night, we’re putting the girls in separate kennels in Steve’s office, along with Tucker, who has another dog bed there. (Three big dogs up in our bedroom is too many, we think.)

It won’t last long. Darby’s family will pick her up on Tuesday, whereupon Beverly and Tucker will rejoin us upstairs. And Beverly will still have Tucker to nap on during the day. 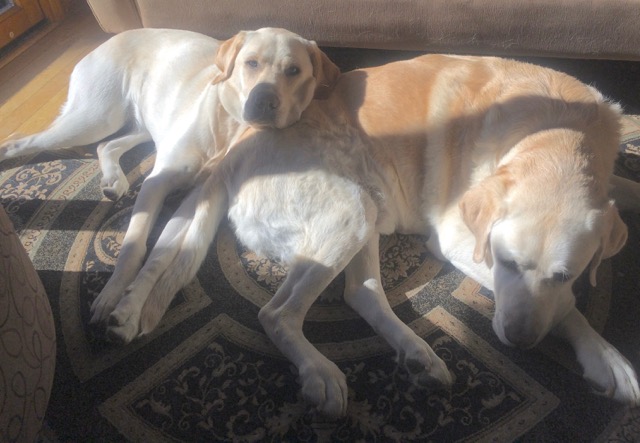 2 thoughts on “Party’s over”