Steve and I can’t resist speculating about what effect Tucker (our first CCI pup, whom we adopted 10 years ago when he failed to make it as a service dog) has on our current puppy in training. In recent years, Steve has begun fretting that the influence is negative — that the pups bond more to Tuck, rather than being most attuned to us. I don’t know about that, but I’m pretty confident he influences them all, albeit in ways that vary from one youngster to another.

Beverly’s immediate predecessor (Kyndall) seemed to learn to Speak by aping Tucker. For some reason, Beverly hasn’t followed suit; she’s shaping up to be one of our few non-Speaking puppies. But she’s clearly learned that the landing at the top of the stairs leading up to our bedroom is one of the best places in the whole house to chill out. (You can see so much! And be safe from attack by mountain lions! Oh wait, there are no mountain lions in the house…)

Even more obvious is Beverly’s adoption of Tucker’s distinctive way of sitting — with his rear end on various landings and his front paws on the stair below. He has sat like this for years. Now Beverly is doing it all over the house. 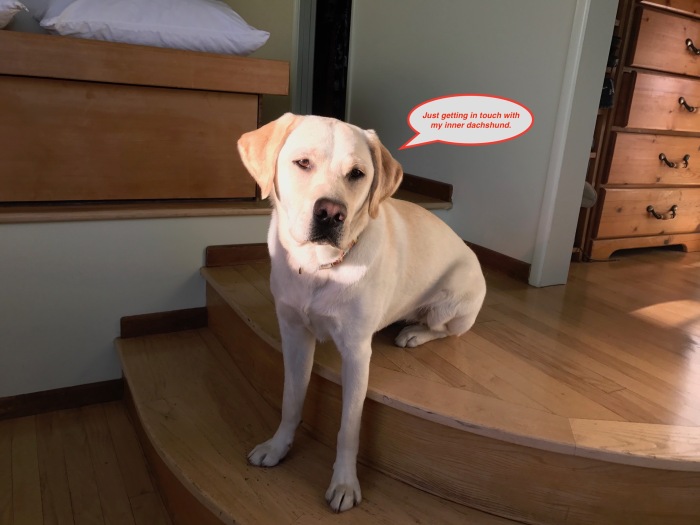 It’s pretty harmless, I guess. I just wish he would teach her something with a bit more practical value.