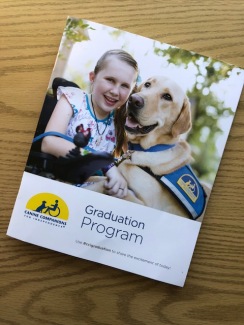 Early in our CCI puppy-raising career, Steve and I learned about the curious custom sometimes practiced when a female dog goes into heat right before her turn-in and thus cannot participate in the matriculation ceremonies. When all the other 40 or 50 puppy raising teams line up and walk their trainee to the front of the auditorium, to be recognized by the assembly, those who don’t have a dog because their girl has been banished to Sex Jail often will join in the procession carrying a stuffed animal.

We thought that was pretty silly. When Dionne went into heat right before her turn-in in May of 2014, we just skipped all the festivities and felt sad. When Beverly went into heat two weeks ago, we felt awful. One silver lining was that we thought it would free us to go see a close friend from the East Coast who was planning to be in LA that day.

Then our friend learned she wouldn’t be free. With nothing keeping me from attending the ceremonies, I realized I wanted to go, to salute and support our cohort of puppy-raisers who’ve been on the same journey over the past year and a half. Attending classes with them, parading and venturing out on field trips, sharing puppy socials, trading problems and funny stories all creates a bond. In several cases that association extends back through multiple dogs over now a dozen years.

Steve agreed to join me, and it struck me: if we were going, we might as well go all the way. I informed Becky Hein, the puppy program director, that we would like to join in the procession with a stuffed dog.

Yesterday we hit bad traffic driving to Oceanside and arrived at the QLN Conference Center only minutes before noon, when the program was scheduled to start. Still, Becky spotted me and gave me the minor paperwork I needed. She also led me to a box containing several plush animals.

I chose one almost as big as a real retriever puppy. Early in the program, Steve flipped it over into the cradling position. He pretended to brush its teeth, file its toenails, and clean its ears, as he has done for real with so many of our puppies. (He shoulders virtually all the grooming chores.) It made me giggle. This was helpful. It’s all too easy to cry from the emotion that drenches these convocations. 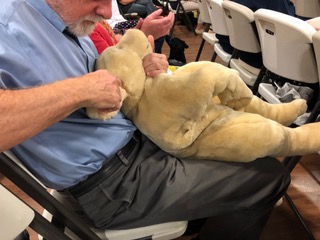 After a while we joined the line-up, hugging our friends and whispering as we inched up to the stage. A couple of folks commented on our puppy’s perfect behavior. When we finally made it to the front, I heard scattered laughs in the audience; Becky explained that the real Beverly was already in the kennels.

Attending the CCI Graduation events takes a big bite out of a day. Driving up and back and finding a parking place takes almost two hours, and the program lasts for close to 90 minutes. We could have built in more time for socializing. But I was glad we spent the time we did. We didn’t foresee it when we first got involved with CCI, but not just the dogs but also their human caretakers have become an important source of happiness in our life.

When we got home I found an email from the assistant puppy program manager with good news: we’ll get our first report on how Beverly is doing in the professional training program on November 29. When that arrives, I’ll share it in another blog post.

One thought on “Stuffing it”