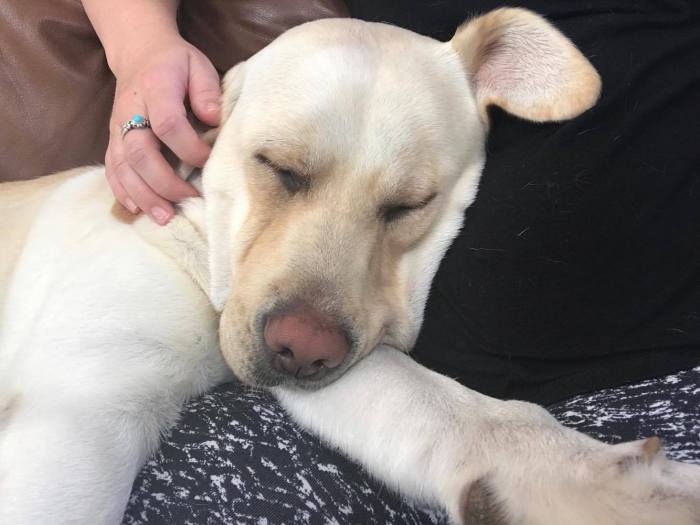 No sooner did I write my blog post yesterday, reporting on the drama that had enveloped Beverly, than I received a message from Stephanie, the CCI trainer who fell head over heels in love with Beverly and had offered to adopt her. Stephanie sounded both broken-hearted and devastated. She’d been talking to a couple of vets and another puppy-raiser who was living with a dog with kidney disease. As much as it obviously hurt, Stephanie had concluded that the expenses associated with caring for a dog in such circumstances — dog food that costs $115 for a 25-pound bag, frequent blood tests and vet visits — were probably beyond her means. “I really was hoping it would work, but I also promised Beverly that I would make her well-being my top priority,” she wrote me.

I called her, and we cried together a little over the sadness of the situation. I don’t know Stephanie, but the hugeness of her heart is obvious. She said another good solution might be available. She knew a vet who had fostered dogs for CCI and had indicated some interest in adopting a release dog. Stephanie had spoken to this woman, and she was very interested, but she needed to discuss it with her boyfriend, who was traveling. Still, Stephanie thought we should hear back soon, and both of us agreed that living with a loving veterinarian might be the best thing for Beverly.

We got the good new just an hour or so ago. As frosting on the cake, this veterinarian apparently practices with another one who is a kidney specialist. “So I truly believe Beverly couldn’t be in a better place!!” Stephanie messaged me. “They would like to take her and make sure she gets along in their family (which I don’t see there being a problem with that because Beverly is PERFECT!) I will be keeping Beverly with me until we find a date that works for them to pick her up.”

We’re eager to see if we might all meet, whenever the transfer takes place. If so, I will certainly report on it.

Years ago, I started blogging about puppy-raising because I wanted to try to capture and share some of this complex and engrossing activity. What a mixture it is. At times, months pass without much of anything happening. The dog has settled into our household, learned all the commands. Maybe we go on a field trip now and then. Then a patch like this comes along, where events are developing faster than I can keep up with them. That’s life, I know. I’m not complaining. Just marveling.