My understanding is that the most important job of CCI puppy raisers is to socialize our charges. They come to us when they’re about 8 weeks old, wild and unformed, and when we turn them in a year and a half or almost two years later, they’re supposed to have excellent manners, at home and out in public. Complicating the initial socialization process is their vulnerable immune systems. They get their first set of shots the day before they leave CCI HQ, but they must receive three more sets before they’re fully protected against such nasty illnesses as distemper, parvo, rabies, and more. Since they also haven’t learned not to urinate or defecate indoors, the puppy-raiser’s opportunity to take them places is limited until they’re about 4 months old.

Limited, but not non-existent. It’s okay to take them to the homes of friends who will forgive the occasional accident (and where no doggy diseases would be lurking). So it was that Steve and I took Adagio to Friday Night at the Movies in the Hillcrest condo of our good friend Alberto. (Happily, Alberto was very understanding when Adagio had his first major accident on the clean white carpet. He says the Folex carpet cleaner worked liked magic.) Adagio slept like an angel throughout the rest of the evening.

Friday morning we also loaded the little guy into the stroller and walked the 6 blocks to Bird Rock Coffee Roasters.

I’m not sure if CCI approves of puppy strollers, but frankly, I don’t want to know if they’re forbidden. Our stroller makes it possible for Steve and me to maintain our normal exercise and coffee-drinking routines during the early months of puppy hell.

Saturday morning I had an 8 a.m. appointment for the works with my hairdresser. As soon as that was over, I raced home to scoop up Adagio and drive out to Santee, where Cyndy Carlton (raiser of Adagio’s sister, Apple) hosts twice-monthly puppy socials. Because of my hair appointment, we got there late. But I didn’t want to miss this gathering. I know for a fact that everyone who attends them has a huge soft spot for all puppies, but particularly for the tiniest babies, when they’re at their maximum cuteness. Retriever puppies are only tiny for a brief window of time. When you show up at puppy social with a 15-pound ball of fur, you feel like the belle of the proverbial ball.

That’s not the main reason I wanted to attend (though it is fun to have everyone coo over your new family member). Mainly, I wanted to see how Adagio would react to the party. His little tail started beating madly as we entered the back yard, and once down on the ground, he quickly found his sister. It seemed to me they recognized each other. They periodically sought each other out. 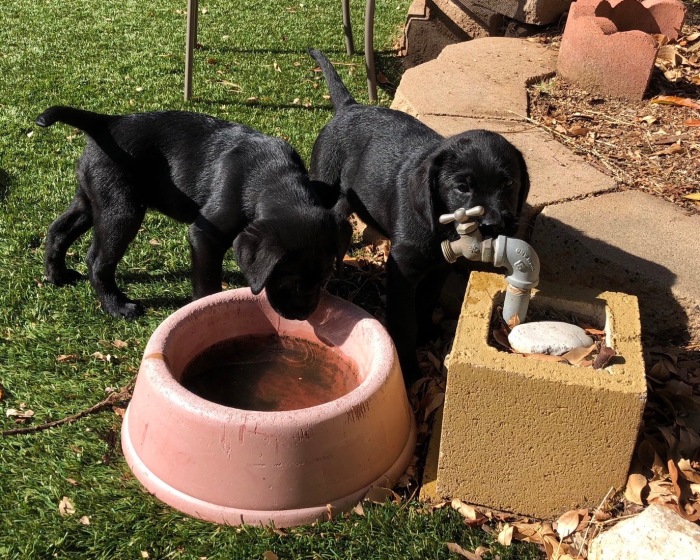 But they also explored on their own and interacted with the bigger dogs.

Back at home, our efforts to socialize Adagio have been going well. Last night he woke us up at 3:30 a.m. with an urgent need to poop, but then he returned to his kennel and allowed us all to sleep till almost 7. Both nights before that, he slept from about 10 to past 5.

He seems to be learning to relieve himself when we take him outside and command him to “Hurry” (at least when enough time has passed since the last such outing). He takes naps that last for hours. Life feels almost normal.

Still, we’ll be in what Steve calls “submarine mode” for weeks to come — with all the carpets taken up, every door closed, barricades installed. And it will take weeks (at least) to truly discern Adagio’s character. In between all those naps, he has brief spells of savagery:

He bites, tries to eat the world, takes running leaps to attack us, and worse — he’s begun humping me! He’s only the third male dog I’ve ever raised, and neither Tucker nor Brando were humpers. I don’t understand the significance of puppy-humping or how to react to it. I guess I need to learn.