We’re coming to the end of the season for our magnificent Mission fig tree. It was here when we moved in 41 years ago, and every year since, in the late summer and early fall, it has yielded hundreds of pounds of fruit. Crows feast on the bounty at the crown; Steve plucks figs from the middle and lower zones and eats them on his cereal. Some years I make jam, and we always give away as much as we can, but figs still fall off the tree and litter the ground around it. Tucker typically has gained at least 5 pounds every fig season, and every CCI puppy we’ve raised has discovered the deliciousness. Except Adagio.

It’s hard to say why he has resisted them. This year when the figs started to ripen, we took pains to limit his contact with the tree, taking him down to that part of the yard on a tight leash. But we’ve done that with all our CCI puppies. Allowing them free access to scavenging opportunities inevitably results in dietary disruption —  not fun for them or us. Still, we inevitably let down our guard, and during those moments everyone except Adagio has quickly availed themselves of the morsels of pleasure.

Whenever we’ve seen Adagio approach one, we’ve sternly reprimanded him. So I wonder: is he more obedient than all the other dogs? Is his culinary palate less refined — or more? (Somehow that theory seems implausible.)

In recent weeks, it seems to me he’s been more eager to get near the tree and sniff around. A few times, we’ve seen him returning from its vicinity licking his chops. Still, we doubt he could have eaten more than a half-dozen pieces, if he got any.

Adagio is not scheduled to leave us and go on to his Advanced Training until November of 2019. If that doesn’t change, we’ll live with him through another season of the forbidden fruit. Somehow I’m guessing he’ll be less resistant to its charms the next time around.

The organization for which Steve and I raise puppies — Canine Companions for Independence (CCI) — takes pride in the fact it was the first to train dogs to assist folks with physical disabilities. CCI started in 1975. But Guide Dogs for the Blind began decades before then, in 1942. We’ve known CCI puppy-raisers who previously raised “seeing-eye” dogs. Steve and I have always heard that training is even more demanding than what CCI dogs undergo. The dogs must learn not only to obey complex commands but also when to disobey an order to protect their human (for example, refusing to walk them into the path of an oncoming bus). Steve and I haven’t known much more than that about what’s involved in the training. However this week we learned a lot.

A new documentary film, Pick of the Litter, takes a close but wide-ranging look at the process. Tuesday afternoon Steve and I and Adagio saw the movie, along with several friends and other puppy-sitters and raisers. Adagio didn’t seem at all interested, even when the big screen was filled with squealing, yipping youngsters. But the rest of us were riveted.

The film opens with the whelping of a litter, then follows the progress of its three male and two female members. It’s suspenseful (some of the gang graduate as guides, but some don’t make the cut), and we were surprised by how familiar many aspects of the experience felt. Some commands are identical — “let’s go!” for one example. Another: the Guide Dogs for the Blind puppies wear halters just like CCI requires.

Other parts — like traffic training — are very different. What shocked me most was that the GDB puppy-raisers apparently can flunk out along the way. They don’t appear to take their pups to twice-monthly classes (as we do), and we saw no signs of the vibrant puppy-raising community CCI seems to foster. Instead, they’re observed by a professional every three months, and the organization can (and does) summarily take puppies back. It made me much less interested in ever raising a seeing-eye dog, as enthralling as their work is.

Before seeing Pick of the Litter, I was a bit worried that our documentarian friends Alberto Lau and Bob Schneider might be discouraged from continuing with their project. For years, they’ve been filming Steve and me raising successive puppies, with the plan of creating a film about the puppy-raising experience. They attended this new film with us and didn’t seem bothered by its coming out first. Although they have shot countless hours of footage, they haven’t yet  wrapped up their work because they’ve been waiting for ONE of our trainees to graduate (something that hasn’t happened for eight years.)  Adagio may not have been enthralled by Pick of the Litter. But Steve and I are still hoping he’ll be the next star. 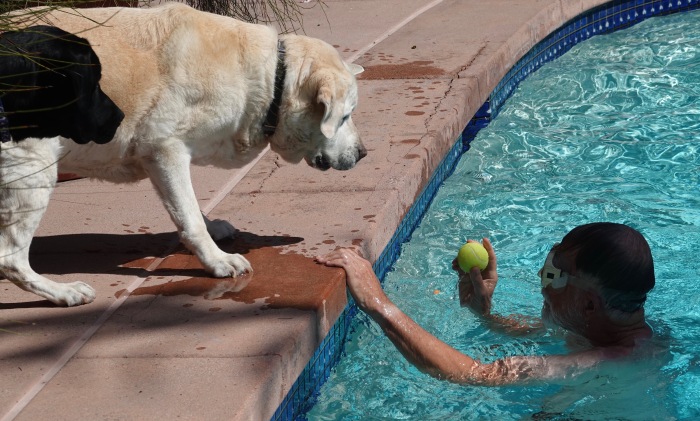 Tucker, who was our first CCI puppy and whom we adopted 11 years ago when he was released for excess energy and distractibility, never was much of a ball-player. In his youth, he would chase a thrown ball a few times. But he invariably got bored and would wander off to do something else.

One thing he did was to invent a variation of ball-playing that we came to refer to as The Pool Game. Tucker never cared much for swimming either. But during swimming season, The Pool Game gave him a novel way to engage with the water. When one or more of us were in the pool, he would find a ball, bring it to the edge, and bark insistently, demanding that the human in the pool pick up the ball and throw it. If we ignored him, he would often drop the ball into the water and bark louder. For some reason, this activity entranced him; the older the got, the more he seemed to like it. In recent years, the mere sight of one of us in swimwear and with a towel sent him into a state of quivering, barking excitement.

This summer, the heat drove Steve and me into the pool more than normal. Tucker will be 14 at the end of November (98 in dog years), and he spends most of his time sleeping. His back hips are failing, and most of the time, when he walks at all, his pace ranges from slow to glacial. So the first time we got into the pool, in June, we were mildly astonished to see him as eager as ever to play The Pool Game. Our routine went like this:

One houseguest exclaimed, “I didn’t think he could move like that!” Sometimes he seemed sore after the fun was over. But it didn’t deter him.

It’s been sweet. But now the hot spell has ended; night seems to come earlier with each passing day, and in response to these changes, our solar-heated pool’s temperature has been dropping. Steve swam Wednesday, but we suspect neither of us will do that again this season.

Tucker may survive to next summer. We hope he does, but I can’t imagine how he could play any games by that point. Unless it’s in his dreams. The other day, I glimpsed how dreaming transports him to better days. He was on his bed, but running at full tilt. I imagined he was galloping through the woods, strong and joyful. Maybe next summer he’ll play that way. 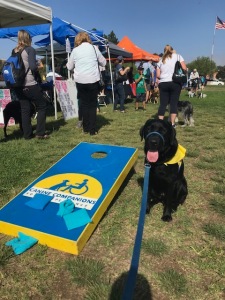 Dogfest is the big fundraiser for our local region of Canine Companions for Independence. Although we’ve participated many times in it and its earlier incarnations, for at least a few years it has been held in the fall at times when we happened to be traveling.

This year, happily, we were able to make it. It took place yesterday, and for the first time ever, Steve and I formed a team to participate in the walkathon. It’s not an athletic event, really just a 10-minute stroll around the perimeter of the grassy area where the event unfolds (at Liberty Station Park next to San Diego Bay). Adagio was very excited by the presence of so many dogs (including legions that are NOT in training for a life of service.)

After the walk, Steve tried to interest him in the athletic displays of the disk-catching dogs (one of the morning’s entertainments). Adagio had no interest. It was hot, and he looked bored. His idea of a true dog fest is one where all the pups get together and run wild. But that one takes place only in dreams. 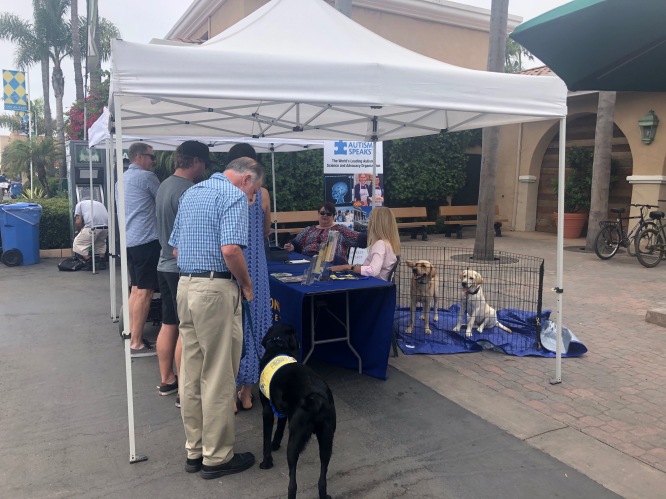 A whole pack of puppies and their accompanying humans descended upon the Del Mar racetrack yesterday (the last day of racing for this summer’s season). Happily, Adagio, Steve, and I and our videographer friends, Alberto Lau and Bob Schneider, were able to join in. The afternoon proved to be a lot less boisterous than one might expect and not at all profitable (that was entirely predictable, given my incompetence at horse-wagering). Still, all the humans had fun.

I’m not so sure about Adagio. Compared to sleeping, which is how he spends most afternoons, there was certainly a lot more to smell and see. But because this was a semi-official CCI outing, all the pups had to be on their best behavior, sitting and walking on loose leashes and staying in Down positions, rather than romping and wrestling, as they would have all preferred. For the most part, their behavior was impeccable, and they got a lot of admiration from the racing fans. But from the doggy perspective, it wasn’t what you’d call fascinating.

His first sight of horses parading around the paddock area did appear to grab Adagio’s attention. 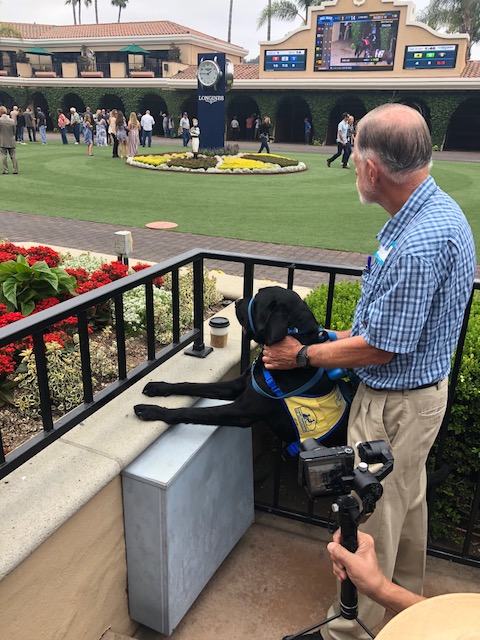 Later, the dogs had an opportunity for an even closer equine encounter. Because one of the veteran CCI puppy-raisers works at the track and arranged for the group experience, the second race saluted the CCI organization. We all got to line up in front of the grandstand and be photographed.

And the puppies were allowed to approach some of the track horses for a nose-to-nose encounter.

At only one moment did he do something unexpected. Shortly before the second race, he barked loudly — twice. I took it as a sign that my hunch about the #2 horse should be followed. Ignoring the 60-1 odds, I put $5 on Chocolate Goddess to win.

And now I have a tip for you: never take the advice of a dog when betting on the ponies.