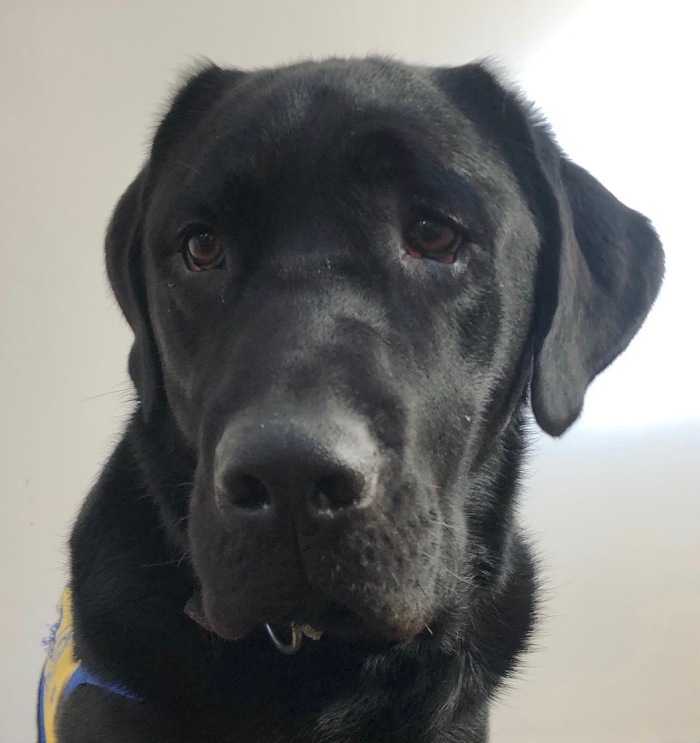 It took several weeks for us to stop finding tufts of Tucker’s white fur in odd places — under the sofa in my office, for example, or in the corner of a closet. Now, save for a single white strand here or there and the box of ashes out in the garage (awaiting interment in Julian early next month), the physical traces of Tucker’s presence have disappeared. The emotional reverberations too are fading. Now it really feels like Steve and I are living with only one dog.

Over the almost-45 years during which we’ve lived together, we’ve gone through a few spells without any dog. For less than half a dozen years, we had just one. Throughout most of the last 30 years, however, we’ve lived with two dogs, and occasionally more, when we hosted doggy houseguests. Each of the 8 CCI puppies we’ve raised has almost always roomed with some other canine.

So having Adagio as the only animal presence in our life feels novel. We’re eager to see how this will impact him. We’ve come to wonder over the years if more of our CCI pups would have graduated (only ONE out of Adagio’s seven predecessors) if each had been the only dog in our house. Every one we’ve raised has adored other dogs. (They all worshipped Tucker, and when we got him, Tuck was crazy about our existing black lab, Pearl.) It felt like Tucker’s very presence commanded each succeeding CCI pup’s highest level of interest. Would they have imprinted more on us if he hadn’t been there? Now that Adagio is an only dog, will he ultimately perform better?

As always, it’s impossible to know what Adagio made of Tucker’s sudden disappearance. In the first few days, we could see him scanning when he returned to the house after outings. Where was Tucker? He didn’t look sad; just…puzzled. He used to love snuggling up to Tucker for naps. At night now, confined to his kennel, we assume he probably misses the comforting smell of another dog, nearby. But now that a few weeks have gone by, does he even remember Tucker? We doubt it.

His absence is probably affecting Steve’s and my behavior more. We’re showering all our affection on just one dog, and we’re feeling filled with resolve to do a better job at readying him for advanced training. Taking stock of Adagio after our long absence in the fall, we’ve been impressed by what an excellent young fellow he is — so easy to live with, napping quietly near us throughout most of the day, never chewing up our stuff, not even digging or eating (much) garbage out in the yard. He learns quickly enough and wants to please us. He’s got a few bad habits (jumping on people when they come through the front door; losing his mind at the sight of other dogs; popping up when he’s supposed to be maintaining a Down Stay under the dining table). But Steve and I plan to work hard at changing these behaviors.

I’m sure November 1 will come all too soon. But for the moment, it feels like we have a lovely ocean of time to live with our only dog.