Steve and I raised one puppy who was a glutton for affection from her earliest months. Darby loved being cuddled and petted as much as she loved chasing the ball and eating her kibble and swimming (she was our only CCI pup so far to be entranced by water). Far more commonly, however, our trainees have warmed to physical affection more gradually.

We’ve been seeing such a change in Adagio in recent months; he’s more apt to approach one of us when we’re seated on a chair or couch and seek out petting. And he’s enjoying such interactions with other humans in a more obvious way.

I saw more evidence of this on Wednesday, when Adagio and I volunteered at a CCI fundraising event inspired by Valentine’s Day. An employee at Intuit (the financial software giant with a big presence in San Diego) has organized a “Cupids and Canines” celebration for several years, but this was the first time a puppy and I participated. An area within the spiffy company cafeteria was cordoned off, and Adagio and I settled down within it with five other teams for three hours. Intuit employees who were willing to make a contribution to CCI could enter to receive some quality puppy-snuggling time.

It was a high-serotonin experience for both the dogs and the humans who got down with them. A few mosh-pits developed: 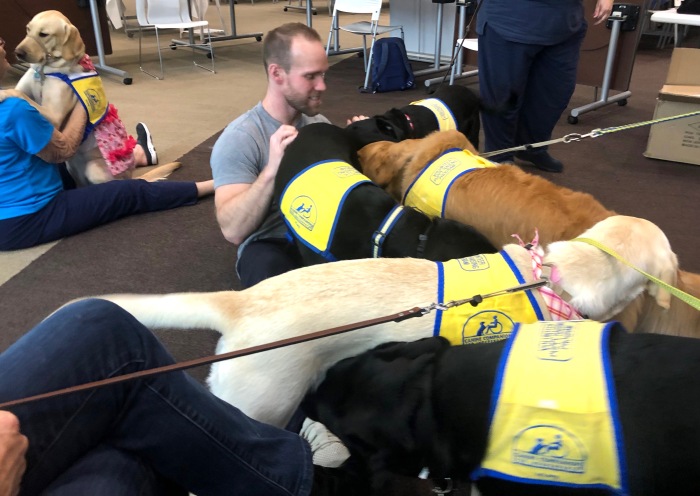 But more folks seemed to prefer one-on-one cuddles (often experienced in serial fashion with the dogs). Adagio reveled in it. 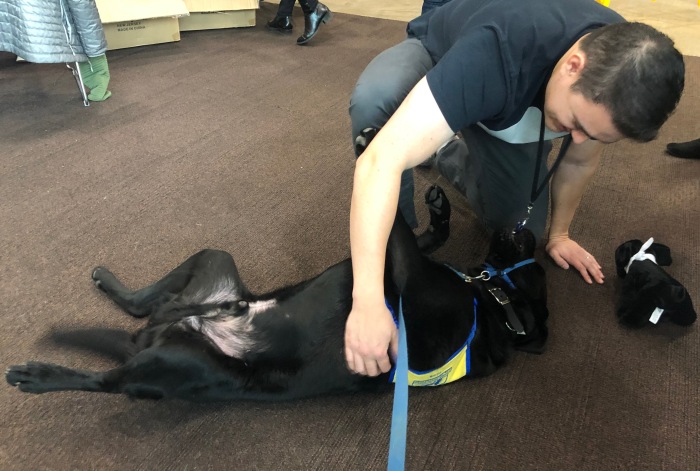 By the end of our stint, I was worried his tail might be exhausted, from wagging so much.

We heard that close to $4000 had been contributed during that day’s event, and another group would repeat the exercise on Valentine’s Day itself. It seemed like a particularly appropriate activity for the holiday of love.

One thought on “Poochy smooches”