If you have to suddenly acquire three additional large dogs, I’ll say this: it sure helps if they’re aspiring service workers. All the training — from their puppy raisers and the professional staff at the CCI southwestern regional center — makes them awfully easy to live with.

The three girls we were hosting (because of the threat to the center from our recent wildfires) could hardly have been better behaved. Friday night we even invited our nearby fellow puppy-raisers, Karla and Mark, and their neighbors to bring over the dogs they all were fostering (a total of four), plus Karla and Mark’s new charge, three-month-old Truckee. We thus had 7 adults humans at the dinner table, 7 adults dogs, and one very young puppy. It was a lot more civilized than one might imagine.

Yesterday we got word that the fire danger had diminished, and the dogs would be able to return to Oceanside Sunday morning. We were delighted to hear that the center director would be transporting 16 of the 60-plus evacuees back to Oceanside in one of the center’s big vans. So this morning shortly before 10, we drove Stonie, Tiny, and Maitai the few blocks over to Pam’s house, where they were loaded into stacked-up kennels. We were sad to say goodbye.

Back at home, however, we got another dog-related call that thrilled us. The CCI staff informed us that Dr. Shields, the vet who conditionally accepted Beverly into her home earlier in the week, has definitely decided to adopt her. Since the two of them met, it sounds like Beverly has undergone some of the most sophisticated medical scrutiny possible. She’s being treated for a potential kidney and bladder infection in the hopes that this may slow the progression of her renal disease. She also has been enrolled in a UC Davis research project and is being followed by a veterinary nephrologist who plans to monitor her kidney function closely.

Best of all, it sounds like Georgette and her family have fallen in love with Beverly. That’s the best news ever. As good as dodging a wildfire.

No sooner did I write my blog post yesterday, reporting on the drama that had enveloped Beverly, than I received a message from Stephanie, the CCI trainer who fell head over heels in love with Beverly and had offered to adopt her. Stephanie sounded both broken-hearted and devastated. She’d been talking to a couple of vets and another puppy-raiser who was living with a dog with kidney disease. As much as it obviously hurt, Stephanie had concluded that the expenses associated with caring for a dog in such circumstances — dog food that costs $115 for a 25-pound bag, frequent blood tests and vet visits — were probably beyond her means. “I really was hoping it would work, but I also promised Beverly that I would make her well-being my top priority,” she wrote me.

I called her, and we cried together a little over the sadness of the situation. I don’t know Stephanie, but the hugeness of her heart is obvious. She said another good solution might be available. She knew a vet who had fostered dogs for CCI and had indicated some interest in adopting a release dog. Stephanie had spoken to this woman, and she was very interested, but she needed to discuss it with her boyfriend, who was traveling. Still, Stephanie thought we should hear back soon, and both of us agreed that living with a loving veterinarian might be the best thing for Beverly.

We got the good new just an hour or so ago. As frosting on the cake, this veterinarian apparently practices with another one who is a kidney specialist. “So I truly believe Beverly couldn’t be in a better place!!” Stephanie messaged me. “They would like to take her and make sure she gets along in their family (which I don’t see there being a problem with that because Beverly is PERFECT!) I will be keeping Beverly with me until we find a date that works for them to pick her up.”

We’re eager to see if we might all meet, whenever the transfer takes place. If so, I will certainly report on it.

Years ago, I started blogging about puppy-raising because I wanted to try to capture and share some of this complex and engrossing activity. What a mixture it is. At times, months pass without much of anything happening. The dog has settled into our household, learned all the commands. Maybe we go on a field trip now and then. Then a patch like this comes along, where events are developing faster than I can keep up with them. That’s life, I know. I’m not complaining. Just marveling.

Beverly has been released from the CCI program for health reasons.

Typing those words, I still feel a shiver of shock. We never detected that her body was any less perfect than her behavior. Indeed, her first report from CCI last week started off with the exuberant declaration, “Beverly is in good health!”

The clue that something was amiss didn’t come until Friday morning, when the vet staff up at the Oceanside center tested Beverly’s blood in preparation for spaying her. (Getting spayed is routine for the girls in Advanced Training; only a handful are chosen to be breeders.) But the test showed two very non-routine values for creatinine and another blood component; this signaled serious kidney malfunction.

A decision was made to proceed with the surgery and inspect Beverly’s kidneys directly. It was then, the puppy program director explained in her phone call to me late Friday afternoon, that the vet could see that one of the kidneys was both small and malformed. The other one looked normal. But it couldn’t be functioning properly or else her blood values would be normal. Instead the staff estimated that Beverly’s one kidney may be operating only about 40% as well as it should. What is unclear is whether this will shorten her life by just a small amount or substantially.

Becky said the vet felt the best course would be for Beverly to start consuming a special dog food, lower in  protein and thus easy on the kidneys. Becky also sadly pointed out that this turn of events meant Beverly could not continue on to graduation. She asked if I thought Diana and John, our puppy-sitter friends, would still want to adopt Beverly (as they had intended to do, in case she was to be released). I said I didn’t know. Adopting a dog with a health problem requires a special commitment, one that I don’t think Steve and I could handle. I asked Becky if she would call John and Diana to fill them in. An hour or so later, she called me back with the news that they also didn’t feel they could take on this challenge.

This is where this story takes a happy turn. Becky had informed me that someone else did want to adopt Beverly — Stephanie Y, the young woman who’s been training her for the past few weeks. Becky said Beverly and Stephanie had developed a deep bond. “When I call her to tell her she can adopt Beverly, you’ll probably be able to hear the scream from there,” Becky said. She pointed out that in her new life as Stephanie’s release dog, Beverly will be able to come into work with the trainer every day. She’ll have a “sister,” Belle, whom Stephanie raised and adopted upon her release. She’ll be showered with exuberant attention and love. Becky says the Oceanside staff jokes that in their next lives, they all want to come back as one of Stephanie’s dogs.

Since then, I’ve exchanged several messages with Stephanie, and they’ve confirmed that Beverly is one lucky dog indeed. “I fell in love with her the second I saw her and I knew that she was such a special pup!!” Stephanie wrote me. “Belle and Beverly have met and enjoy cuddling and sleeping next to each other!! During these first few weeks, I want to make sure that both dogs are EXTREMELY happy in their new role as sisters and their well-being is my top priority!!” 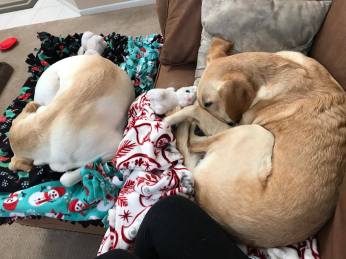 She sent me these comforting photos and a video, and we plan to meet in person soon. I fell asleep myself Friday night filled with such conflicting emotions: sadness over Beverly’s troubled kidneys, grief that she won’t have the life we imagined for her, joy that she has found her forever angel. Because of the latter, I slept soundly.